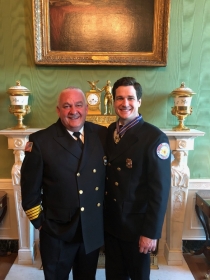 On February 20, 2018, President Donald J. Trump presented Sean Ochsenbein (extrication technician/instructor with the Putnam County, TN Rescue Squad) and Deputy William Buchanan (Sheriff Deputy from Avery County, NC) with the "Public Safety Medal of Valor" award, which is the highest award that can be presented to a public servant. These brave men were each awarded this Medal for their efforts in extricating the passengers from two vehicles that were involved in a head on collision.

Purely by chance, Sean and William - who had never met before - happened to arrive at the accident scene at the same time. Upon investigating the scene, they determined that the passenger in one of the vehicles was deceased, however, the passenger in the other vehicle had survived but was pinned inside the vehicle. The men quickly realized that both vehicles were starting to catch fire from leaking fuel. Sean and William attempted to open the driver’s door to remove the surviving passenger, but the door was jammed shut. At this point, Sean proceeded to take a tow strap from his vehicle and wrap it around the window frame of the jammed car door. He then connected the tow strap to his vehicle and used it to force the door open. The men then pulled the surviving passenger from the vehicle just as it was becoming fully engulfed by the fire.

My name is David Anderson. In addition to my employment as a District Sales Representative with IWC Food Service in Cookeville, TN, I serve as Assistant Chief of the Putnam County, TN Rescue Squad, where I have accumulated 30 years of public service. I was fortunate to be involved in training Sean as a vehicle extrication technician, when he first joined the Rescue Squad. Along with Williams supervising Sheriff, we were proud to nominate Sean and William for their heroic efforts in responding to this serious vehicle accident and for saving the life of one of the passengers. In total, 174 nominations were submitted to the Dept. of Justice from across the country. Of the 174 persons nominated, only twelve persons (six separate accidents) were chosen to receive the award. Sean and William were two of the award recipients. IWC Food Service is proud to honor these brave men as first responders.

BACK TO NEWS & EVENTS

Business relationships you can depend on!

Find out how iWC is family minded.